Lucky me! My most anticipated movie of this year is the first one I see! Now my expectations for the rest of 2016 can be as dulled as is necessary to get through this “job” without going mad!

The film in question is the latest Oscar nominated movie by Alejandro González Iñárritu, “The Revenant” starring Leonardo DiCaprio as a man out in the wilderness trying to get his own back for something. 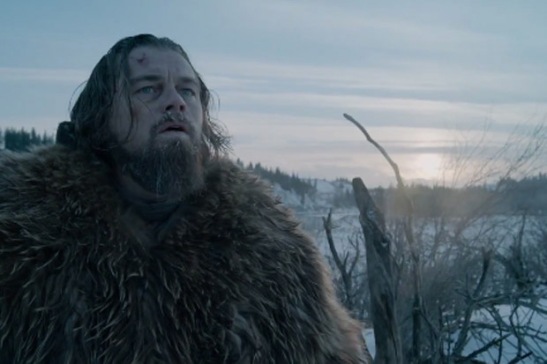 After one particularly mad party, Jordan Belfort found himself in a mighty predicament.

Whenever I talk to people about this movie, they say that they either want to see this movie because of the intense trailers that have run for it or because the lovable Leo is in it. As a pretentious cinephile, my reason for excitement was Iñárritu. The man’s last film (and as of this moment the only movie I’ve seen of his) was “Birdman” and if you’re familiar with this blog, you’ll know that that was the first and best movie that I reviewed last year.

So in those 12 months has anything changed? Can this movie do pulsating tension and glorious action as well as “Birdman” did tragicomedy and introspectives on the nature of love both familial and of a film fanbase?

First of all I’ll address an elephant in the room regarding our lead. Namely, that he has not won a small golden naked man. To state what may be obvious from the trailers, Yes, DiCaprio deserves an Oscar for this movie like he may have done on a number of previous scandalous occasions that the Internet gets hung up on. I’m not however going to do the clichéd thing and say “If he doesn’t win, I’m done with the Oscars.” I was done with those things just after it became cool. My award to Leo, regardless of what happens in a few months is the following paragraph:

This is the best performance I’ve seen from the man since “What’s Eating Gilbert Grape?”. He completely invests himself into the difficult situation his character gets thrust into, mainly expressing it through some Native American language, which I must confess I cannot identify, and through sheer physicality. Leonardo, if you’re reading this, and I know you are, you definitely deserved that long break on the beach you took while you grew your beard between finishing “Wolf of Wall Street” and starting this, ironically in the style of Jordan Belfort!

In support we have Tom Hardy who has not put a foot wrong in the time I’ve been aware of his fine talent. His exceptional, dirty and growly performance been nominated too as a supporting role, which seems a little strange considering his lead role in “Legend” was, in fact a better one. I suppose it gives him more chance against Leo.

In the press coverage of this film, much has been made of the extraordinarily complex, expensive and outright dangerous production that was “The Revenant”, and from what we’ve got it only shows one thing. That Alejandro González Iñárritu and his crew make up the best examples of those who work for their art. Inniritu is officially one of my favourite directors of our time, having only seen two of his films. In the flabbergastingly beautiful and thrilling sequences in this movie, he has confirmed to me the blasphemous truth that a group of filmmakers with enough talent, can in fact offer a simulation of godlihood over a moving image. It’s movies like this that remind me what cinema can do.

This story in film form is utterly superb. While I believe I still gravitate to “Birdman” more, that’s little fault of the movie. Each do what they do best and yet “Birdman” spoke to me personally with a louder voice. Whether you love or hate “Birdman”, you should watch this.

Before you do though, I must make a serious note to those who have a problem with violence against animals. I have seen no evidence that there was any animal cruelty involved in the making of this film or that any were harmed. However, the simulation of some scenes were so intense and impressive that I’d imagine it would upset some. I’m surprised it has not been put in the BBFC rating card, but this is me telling you to be prepared and I hope that the entirely necessary yet hard to watch scenes don’t get in the way of your watching experience of this great movie.

This entry was posted on January 18, 2016 by Craig Andrew Robertson in Film Review, Released in 2016.