Over the course of this film, which stars Academy Award Winner Christian Bale, we see his character discover something monumental in 2005, the same year Bale helped us rediscover Batman in Batman Begins, to 2008 when that monumental thing destroyed the economy and Bale reappeared as Batman in the $1 Billion Dollar grossing movie The Dark Knight! Life imitating art, imitating life, I suppose.
The Big Short stars Christian Bale, Steve Carrell, Ryan Gosling and Brad Pitt, and tells the story of some people who foresaw the collapse of the U.S and, effectively though a little more complicatedly, bet against the strength of said economy. 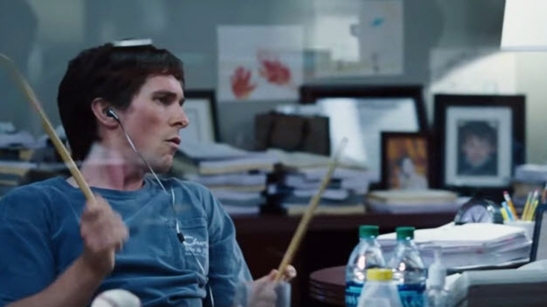 While Christian Bale is too late to audition for the Academy Award Nominated Whiplash, he’s not too late for this movie.

Based on the book from the same author as Moneyball, having seen this film, I have to be honest, I have the same bizarre feelings towards it as I did that film adaptation, namely, I did not get a lot of it but I very much enjoyed it.
Films like these do something I adore when it comes to the portrayal of difficult to handle concepts, whether those be baseball or economics. They treat the audience like adults. Director Adam McKay, known for Anchorman, and the other excellent writers of this movie use a meta – cinematic style which, when done right works so unbelievably well. Some of the winks to the people in my theatre had me chuckling. Not laughing, but chuckling.
And that’s something you need to know before heading into this movie, it is NOT a comedy! With “The Martian” and this being nominated for and winning so many comedy awards, perhaps Hollywood is acknowledging that so much of the comedic cinematic foundation is as solid as the housing market of 2008.
But, I digress. What this is, is a drama with an excellent, dry sense of humour, done in a documentary-esque style which highlights that like The Wolf of Wall Street, which, on a side note, was definitely a comedy, the punchline to this grotesque, painful, but beautifully told joke is “The Aristocrats”, our people in power who have done nothing meaningful to sort out the crisis those people put us into (at least according to The Big Short). That’s the kind of skill only a really good comedy director, writer and group of actors can have.
I am not a political guy, the last time I checked. What opinions I do have in that sector (outside of general principles of fairness regardless of creed, colour or class) I prefer to leave out of my reviews. And when it comes to financial matters, I’m almost happy to say I’m in a state of blissful ignorance, occasionally interrupted by scepticism from Newsnight or from optimism from a deeply entrenched belief in the goodness of humankind (blame The Lord of the Rings).
Movies like these are of course developed to appeal to Lehmanns like myself, yet like I said this one did not talk down to me. Like a good teacher, it showed me the real world in its harshness with a light-heartedness that helped me swallow the shocking horror of what some corrupt men and women did to so many.
This is a film. It’s a piece of entertainment which most likely will have been influenced somewhere down the line by the prejudices and beliefs of those who made it. In once sense it doesn’t matter whether what it’s telling us is 100% factually accurate (in fact the film openly acknowledges that some of what it’s showing us didn’t happen), what matters is that it spreads a message about corruption and greed in a powerful and often darkly amusing way.
And regardless of whether what I saw was all real, like after seeing a shocking documentary, I left the cinema in a mixture of joy over seeing a great film and anger over western capitalism.
Recommended Scenario: When you want to see the awesome cinematic possibilities of American economics.

This entry was posted on February 3, 2016 by Craig Andrew Robertson in Film Review, Released in 2016.