Eddie Redmayne is back, once again playing someone who must contort themselves and speak in an unusual manner while having problems with their family. Hopefully we don’t get a repeat of what happened in Jupiter Ascending.

This time, he plays Lili Elbe, the first person to have a male to female sex change, back in the 1920s. Through the runtime of this movie, Einar Wegener, famed Danish painter, transforms into Lili, while the change puts a strain on her marriage to another Danish painter, Gerda Wegener (played by Alicia Vikander). 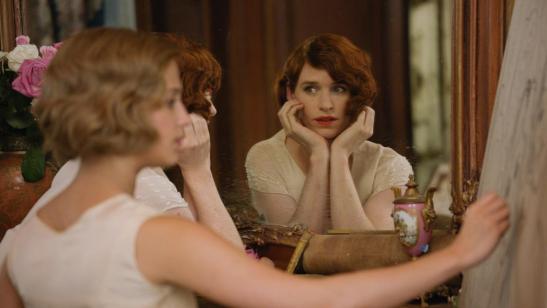 I was interested in seeing this movie since it was announced last year for three reasons. One, I enjoy (most of) the work of Redmayne and I now know that I wholly enjoy the work of Alicia Vekandar. Two, it’s directed by Tom Hooper, the director who may be Oscar baiting, but is actually a pretty darn good talent when he puts his mind to it. And thirdly, I was interested to see what a mainstream movie in 2016 would do with the subject of transsexuality.

Before we go onto what this movie does with its subject matter, let’s review the movie itself.

Redmayne and Vikander are both up for Oscars this year for their performances here. I agree, their performances are actually very good. Not too showy, but still getting all the right marks of despair in this confusing situation. Their relationship is the core of this movie and I am very pleased by how well they connect and how tragically things fall apart.

I don’t think either should win, however. My choice for Best Actor is Leo DiCaprio and Vikander’s role here is by no means “Supporting”, that is if I cared about the Oscars. I also believe that Vikander’s stand out performance of the past 12 months was her work on the marvellous Ex Machina.

The story is also very good. The formation of Lili into a full woman is very well-paced and does contain some moving moments. Watching someone discover who they really want to be, after years of it being hidden is something that I can’t help but be moved by.

For some reason though, I found myself not fully moved by this sad story. Perhaps it’s because it was obvious from the get-go where this story would lead. Anyone with a basic idea of what the premise is will be able to predict where this film will go.

There’s also an irritating sub-plot, if you can call it that, wherein Vikander’s character tries to reach out, romantically to another man. I don’t know if this actually happened and I get why they would include it, to show what this experience is doing to her, but I found it way too clichéd and distracting from the point of the piece.

Tom Hooper is a director that I notice has been getting flack from some corners of the internet film critic community, not necessarily because they don’t like his movies, but more because he appears to be exploiting a formula for giving himself Oscar gold.

While The King’s Speech, Les Miserables (2012) and even The Danish Girl all tick various boxes for the retrieval of the golden naked man (actors having transformative “actor-friendly” parts, bizarre hit & miss cinematography, historical subjects, British accents, royalty, technical and subjective gimmicks that grab headlines just for being there etc) I still love the former two films very much and I think that’s down to in no small part the work of the helmsman.

The Danish Girl is probably his best looking film thus far. I hope that he has learnt the lessons of his previous work, that just because one can break the rules of basic composition to convey something unique, sometimes those rules are meant to be followed. (Just re-watch Les Mis and ask why the camera is that close to Russel Crowe’s face.) What’s also good is that he still knows how to gain good performances.

Now let’s get onto the tricky subject, the subject.

With so much going on in the world regarding the LGBTQ community, it was only a matter of time before we started to get more mainstream depictions of those in that community. Queer cinema, cinema that predominately features gay, bisexual or transsexual themes, has been around for ages and has been getting the attention of critics for ages.

Maybe that’s why when I looked at initial reviews of The Danish Girl, some were a little negative when discussing this subject matter. They’d seen all this before and this movie feels like an introductory course on what being transgender means.

But to me, as someone outside of that community, having never gone to Cannes or Sundance or really seen any of these smaller movies, Boys Don’t Cry, Tangerine etc, my experience is probably a lot closer to that of the general cinema going public, or at least the ones who go to the awards season movies.

These people, for the most part, will obviously not need a beginner’s guide to what transgender people go through. However, with this film, a classy “Based on a True Story” drama, we have a means of breaking down an invisible, non-enforced barrier when discussing this subject. Like with something like Django*, taking a subject matter (in that case slavery) and putting it in a familiar genre (in that case the western) gave a bit of a refresh in the way we look at this issue.

Mainstream media is certainly talking a lot about the transgender community at the moment and the depictions in movies and TV that are coming out at the moment are thankfully positive.

I don’t think we’ll be talking about The Danish Girl as if it’s something earth-shatteringly controversial, but it serves as an example of 21st century mass media opening up this whole issue to a new generation. I think that’s a humble achievement that doesn’t necessarily deserve a standing ovation, but deserves recognition from a polite nod.

Recommended Scenario: If you want a pretty decent costume drama that does something pretty unique with a pretty Eddie Redmayne.

*I’m sorry I keep going on about Tarantino films. I’m getting into a habit.

This entry was posted on February 21, 2016 by Craig Andrew Robertson in Film Review, Released in 2016.