Jodie Foster gives us a film about capitalist greed. Will it be as ferocious as The Wolf of Wall Street or will it fall short of The Big Short.

George Clooney plays the host of a TV show which covers the ups and downs of Wall Street in a modern, hip sort of way (think Bloomberg meets TMZ whilst keeping the purpose of information sharing). One day a man enters the studio with a gun and places Clooney in a bomb vest which he says will go off if those responsible for a Wall Street hiccough are not identified and penalised. 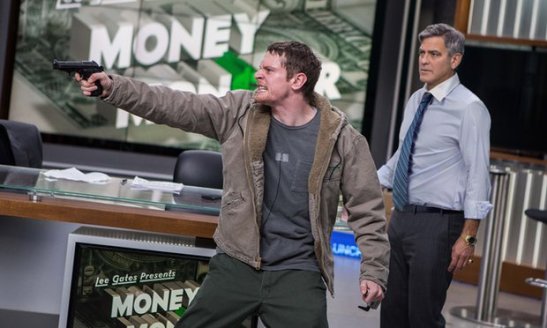 This would make reports on the stock exchange a lot more interesting!

From the first few minutes of this film, it was clear the direction of the most important character arc would fly. Clooney’s character, Lee, will go from a jaded profiteer of the arguably broken system of capitalism and go to the side of the angel that has come to spread the news while holding a gun.

What I admire most about this film are the little details that go against the grain of how you’d expect this film to go.

For one, Lee is a bit of a scumbag. He’s not necessarily evil, but he puts the audience in mind of some of the less good parts of the elite. The closest comparison is obvious in that it is the same slight change in character you see when he plays roles written by the Coen brothers, particularly his recent role in Hail Caesar. His traditional Clooney charm is there, but it gives way to very human reactions to being threatened by a maniac with a gun.

Speaking of that maniac, Jack O’Connell is our hostage taker of the day and he does a very good job in the role. It was a rather smart casting decision to get O’Connell in this role since it is only his third major Hollywood role, allowing us to see him as even more of the everyman that his character is.

What’s also quite clever about this character is that he is not a prophet come to save us from the machine. He’s a guy and not the smartest at that. He comes into the studio guns literally blazing and holds up a building of people to spread his message which in the end is extremely vague. Even he doesn’t really know what it is that he wants. All he wants is accountability for those who deserve it. As noble a goal as that is, he does take questionable methods to achieve it. What I like about this movie’s writing is that it acknowledges this fact.

Much of the rest of this film is pretty by the numbers thriller stuff, with some decent humour and dialogue thrown in occasionally. The bad guy is who you think the bad guy is. We’ve heard the underlying message of good journalism and making the powerful accountable.

What’s more is that the end result is a pretty elaborate plot that I’m sure CinemaSins would have a field day on it.

Jodie Foster doesn’t add much style to this film, preferring to allow the action to unfold in the lens of a more typical Hollywood thriller. In a way that is actually entirely appropriate. To spread the bloomin’ obvious message she and the screenwriter’s were trying to convey, she takes the Roland Emmerich approach to spreading themes. By making the film seem as typical as possible, more people might be able to connect with it.

Either that or it’s a pretty standard thriller.

Recommended Scenario: If you enjoyed The Taking of Pelham 123 (2009). In essence it is actually quite similar.

This entry was posted on June 3, 2016 by Craig Andrew Robertson in Film Review, Released in 2016.