A Hologram for the King

To prepare himself for the crime against cinema that is the possibility of another Dan Brown adaptation, Tom Hanks has gone to find himself in an indie dramedy in Saudi Arabia.

Hanks plays a salesman called Alan Clay who is tasked with selling holographic projector technology to a Saudi king. All the while he is trying to deal with the fact that past decisions he has made have hurt him and those he cares about. 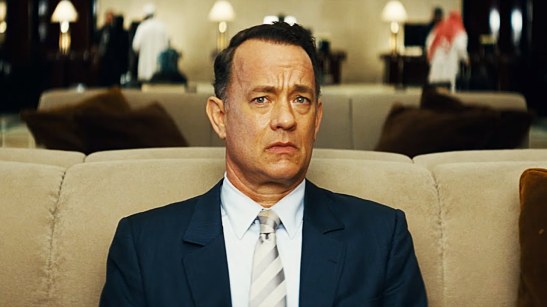 Before Martin Freeman, Tom Hanks was the King of the “Are you kidding me?!” look.

The best way to describe this movie would be that it is Lost in Translation, but it exclusively focuses on Bill Murray’s character and he has considerably more practical reasons to moan.

While Murray’s excellent performance in that masterpiece certainly dealt some severe existential issues that he faced, he had it pretty easy in the moment in Japan. Hanks in Saudi Arabia has to deal with the heat, unhelpful hosts, a divorce and most importantly (to the mind of a 1990’s baby like myself) intermittently active Wi-Fi.

Through the course of the film, Clay has to deal with the problems he finds there while also dealing with the ones he brings with him.

There is one thing I would like to say out the gate about this film, Tom Hanks is still one of the very best Hollywood actors around. Here he puts forward a side which, like George Clooney’s performance in Money Monster, we don’t often associate with him. Here he is a sceptic who must put on a face of smiley go-lucky charm we like to associate with the actor to perform his job. There is a spectacular transformation shot of him putting on said face as he meets his co-workers in Saudi for the first time. It is a very good performance.

Tom Tykwer, the director of this film (formerly one of the three behind the underrated Cloud Atlas), also does a pretty good job as a visual storyteller. He, his editing and cinematography team capture the beauty of this desert land in which our hero finds himself.

The thing I really love about this film is how it never strays into full on pretention as it could so easily have done. In movies striving for this tone and theme of self-discovery, like the 2013 romantic-sci-fi-drama Her, one could so easily lose focus at points and end up taking up a lot of the dialogue with discussions exclusively on the film’s theme and not a natural interaction between the characters and that theme*.

There is a balance held between the visuals, the dialogue and Hanks’ performance which is very well held throughout the runtime of the movie.

This is a pretty darn good film. It is moving, funny and very satisfying.

Recommended Scenario: If you want to have a double-bill with the still superior Lost in Translation.

*Please note, I do really like Her, though I must point out this criticism of its otherwise very clever script.

This entry was posted on June 4, 2016 by Craig Andrew Robertson in Film Review, Released in 2016.