When Marnie Was There

If you are a frequenter of the internet, you will have heard of a Japanese Animation Studio with almost unanimous critical praise, more popular amongst those familiar with them than even Disney and Pixar. Their films include films which are often sited as some of the greatest movies ever made. Princess Mononoke, Spirited Away, The Grave of the Fireflies are among their most praised works. Their name is Studio Ghibli. This might be their final film.

When Marnie Was There, written and directed Hiromasa Yonebayashi and based on the novel by Joan G. Robinson tells the story of Anna Sasaki, an orphan teenage girl who is suffering from repeated asthma attacks. To help her deal with this, her guardian sends her to the countryside to live with her aunt and uncle. There she finds a mysterious looking marsh-house and a blond girl called Marnie. 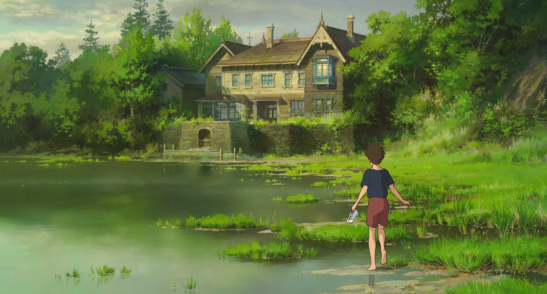 It is interesting to see a Japanese adaptation of a Western source material since, with the exception of Kurosawa’s Shakespeare adaptations, the trend often goes the other way. The result in this film is a kind of film I don’t think I’ve seen from Ghibli before.

The whole feel of this movie is decidedly more contemporary than other Ghibli films. Not only is there little in the way of the magical creatures and daemons we are used to in their more “Japanese” films, this feels like it comes from a western angle in its style of storytelling. This is a young adult film. This is a coming of age story.

With that comes the tropes that we’re used to in young adult films. A loner kid finds a weird kid and they find they have lots in common and they have to help one another and while doing so they find out who they both are.

I have never seen this particular style of story portrayed with quite as much beauty, not only in its presentation but in its story’s execution. I connected with and dare I say loved Anna and Marnie (played by Hailee Steinfeld and Kiernan Shipka in the English dub I saw) in a profound way.

Does the film have clichés? Yes. The asthma, the free-spirited teens, the possible ties to learning about one’s sexuality. I could complain about these, but I won’t because these are as old as the very genre itself. A cliché is not necessarily an evil if it is executed as well as this film is.

This is a film which made me laugh and cry and at the end feel even more passionately in love with Ghibli. I desperately hope that this amazing group of creatives don’t leave us, but if they do this is a terrific, small movie to leave as a parting gift.