Hunt for the Wilderpeople

Trust Emma Malins to recommend we watch one of the best films of the year!

The Hunt for the Wilderpeople is a comedy set in New Zealand starring Julian Dennison as a troubled youth called Ricky who is adopted by two farmers played by Rima Te Wiata and Sam Neil. Due to bizarre yet oddly moving circumstances, Ricky and Uncle Hec must go on the run from the New Zealand police in the Bush! 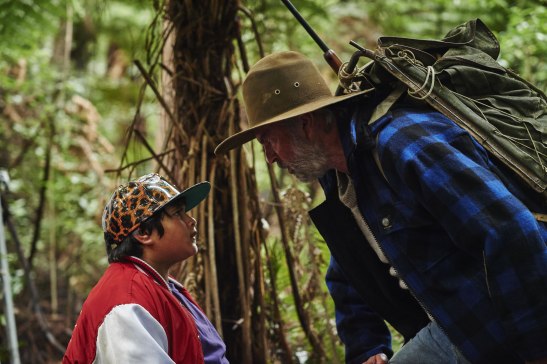 I don’t know if this is the funniest new movie I’ve seen this year, but its pretty close. Newcomer Julian Dennison is a diamond of comic timing and his chemistry with a curmudgeonly Sam Neil is electrifying.

Their journey through New Zealand’s gorgeous landscapes is so funny, so magical and just so lovely that if I wasn’t laughing, I was beaming with sheer delight.

I didn’t get a chance to see What We Do In The Shadows, but I now know why everyone was going crazy for Taika Waititi’s direction and writing. I hate hearing this expression, plus it’s probably too early for this anyway, but this guy might just be the next Edgar Wright in terms of comic skill behind the camera. Maybe this guy’s Marvel dreams won’t fall through.

What elevates this film is, of course, the main characters. Not only are they funny as hell, but the film’s intrinsic theme of the abandonment by society and judgment of kids is executed to a T in such a way you’d think Paul Thomas Anderson had a hand in it.

Jeez, I’ve mentioned 3 great modern directors in this review so far. It’s almost as if we are in a golden age of cinema or something!

I’m genuinely finding it hard work to find something wrong with this film. This really is one of the most perfectly done films I’ve seen this year.

Recommended Scenario: Please watch this Indie darling of a mini-masterpiece.

This entry was posted on November 1, 2016 by Craig Andrew Robertson in Film Review, Released in 2016.