My apologies for being so late again with this review. I saw this movie last year for goodness sake!

Passengers is a sci-fi film starring Chris Pratt and Jennifer Lawrence as two passengers on a flight into deep space. Their sleeping pods malfunction and they are forced to stay awake 90 years before their destination. 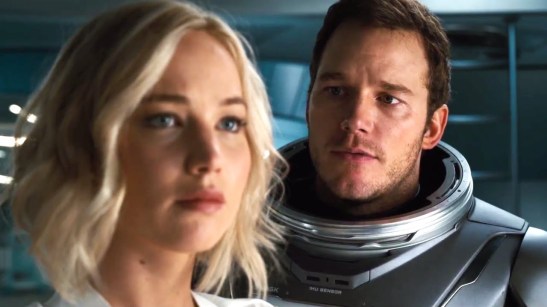 This is the epic moment where X-Men became part of the MCU!

The trailer for this film looked relatively interesting. A cool little thriller premise and a couple of good actors made this look like some good fluff entertainment.

What you get here, however, is something a little meatier than outward appearances suggest. Perhaps it’s something to do with the colour palette of this film being so similar to the washed out dullness of Jurassic World, but I didn’t quite expect the level of dark character work we see in Passengers.

Rather than a thriller of two people up against some corporate conspiracy starring that guy from Guardians of the Galaxy, we get alterations between a survival movie, a psychological horror and a cute drama.

Our leads handle these levels rather well, Pratt showing dramatic chops and other new parts of him which I’ve not seen from him in anything else and Lawrence being the typical mix of charm and charisma you’d expect. Their connection is also believable for the most part.

Michael Sheen plays the lead pair’s only companion in the form of an android bartender. He is delightful. Funny robots are a dime-a-dozen these days, but this portrayal of wide-eyed innocence at the entire situation and pseudo-barman-wisdom is so endearing, I have to admire his execution. The fact that they didn’t give him some evil HAL programming makes me appreciate this film’s lack of cynicism a bit more.

Is this a great sci-fi flick then? No. Some elements like the action are kind of standard and there are of course some major leaps in logic, we aren’t going for The Martian levels of realism. However, the ending made me annoyed in more than one way.

They could’ve gone the whole way with some of the darkness in this film’s ending, while still leaving the audience happy. Also there’s a bizarre wordless cameo which made me scratch my head in the last 30 seconds. I don’t like that kind of thing in a film which doesn’t in any other way try to pull you out of the film.

Recommended Scenario: If you want a relatively original sci-fi movie which takes some chances you’d otherwise not expect.

This entry was posted on January 3, 2017 by Craig Andrew Robertson in Film Review, Released in 2016.