Here we go again in a place where no one can hear you scream and where there’s a 60-70% chance that the movie will suck.

Covenant is an Alien film set 10 years after the disaster that was Prometheus but still a few years before the perfection that was the 1979 Alien. So by logic this iteration in this long out-of-date franchise should be half-crap, half-brilliant. 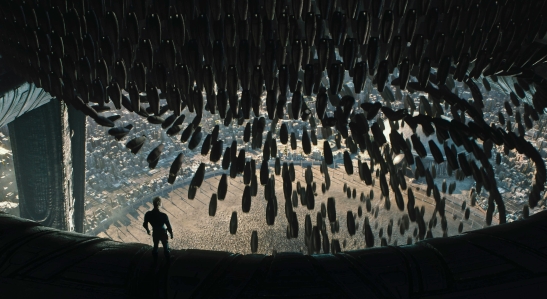 This scene is both awesome and a bit off!

In a way this theory holds true.

As always I’ll start with the good. Unlike Prometheus, which tried to turn Alien from a subtle allegory on the horrors of rape with brilliant monster action and suspense into a pretentious muse on creation with terrible characters and writing, Alien: Covenant actually holds its own in a few key filmmaking areas.

The characters are done so much better here. I know who at least some of them are, even if I don’t know their names and I don’t want anything bad to happen to them. I think Sir Ridley Scott needed to direct The Martian just to remind himself what likable characters look like. That is despite the fact that the lead is played by that woman from Fantastic Beasts who would not stop crying (she’s a pretty good actress, but please stop being on the verge of tears for every line delivery!).

While the bare-bones plot remains the same as it has for the past 6 canon Alien flicks, at least this time the motive for the crew landing on the planet infected with monsters makes a bit more sense than in previous entries.

In terms of horror, it isn’t bad. There’s a bit of gore, a little suspense. I’d say that Scott’s intention was to be the director to finally combine the “I hear it in the air-ducts” chills of Alien with the “Get away from her you bitch” thrills of Aliens. While I personally prefer the former, the cocktail doesn’t taste bad.

Of course with Scott at the helm, this is a technical marvel. Apart from some editing weirdness near the end, this is a solidly done piece. Heck it looks so good that the CGI monsters for the first time since Shelob in The Return of the King are actually a bit scary!

The final and best of the good things in this movie is Michael Fassbender. In a dual role as two androids he is both extraordinarily creepy and a little charming. Getting slightly into spoiler territory, one of the androids has some not so nice plans which are so, so good and so, so bad.

The philosophy of a great deal of Sir Ridley’s filmography revolves around a battle between God and Man. In Prometheus he tried to culminate this into a final essay on the matte and failed spectacularly. Here he succeeds a bit with this message, but so much that we should be applauding him for it.

Some clumsy explanations and clumsy lackings in explanation lead to something that’s almost clever, but not quite. It’s quite infuriating.

What’s worst is that Covenant has an awkward relationship with Prometheus. Stuff which was going to be explored deeper in that film has been dropped or half-continued. This episode is really made better and worse for the existence of its predecessor. Perhaps one day a re-edit of the two and one finale to what I think will be Scott’s think-piece prequel trilogy will make this whole thing make sense.

Until then, I refer thee to my recommended scenario.