Let’s put this review this review into Cruise Control as Tom Cruise is back as Jack Reacher in this latest Lee Child adaptation thriller.

Jack Reacher: Never Go Back has Reacher try to defend a Mayor in the army who has been accused of having ordered two of her men dead and has many people after her. 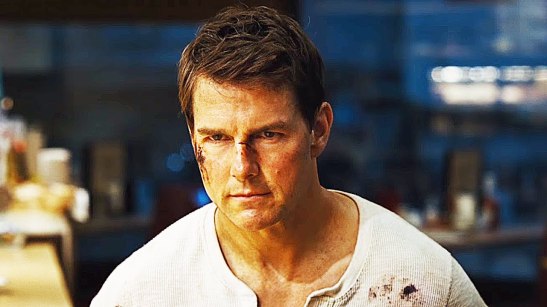 The previous Jack Reacher flick was relatively interesting. It came out not long before Tom Cruise’s failed sci-fi dystopian film Oblivion which also had him play a guy called Jack, and it tried to be something of a grounded thriller. Grounded being a relative term when it comes to Tom’s movies. It had some cool fight scenes, but it was pretty much a TV mystery movie with a bit more of a budget and with Werner Herzog as the villain for some reason (though I’m not complaining, I could listen to him for hours).

This film goes for that “realism” once again. And once again it’s Tom’s realism.

I still have no idea why Jack is pretty much a homeless man despite the fact that, at least at the start of this film, he doesn’t have anyone after him. If he acted like a homeless man who kicked ass, it would be kind of interesting instead of annoying. Of course, when people come after him, it’s a Private Military Company so no real government institutions get offended in real life.

The movie does have some cool, surprisingly violent fights (which makes me think some stuff was cut to get a 12A) and multiple moments of Tom Cruise running. The latter thing made me laugh on a couple of occasions as it looked like Tom wanted to run in a scene whether he needed to or not. Running = EXCITEMENT!

Thrown into the mix is Reacher’s maybe-maybe-not daughter. It’s the main crutch on which this injured soldier of a story rests and its made of easily broken glass. I hate the kid, I hate her relationship with Reacher, I hate the “drama” and it makes me really not like Reacher himself, just for how boring it gets.

The only truly redeeming feature is Cobie Smulders as the badass soldier Reacher tries to protect/try to date. She’s just pretty cool. Although, looking at her Wikipedia, she’s 20 years younger than ol’ Tom. Hmm…

These films are the Takens of Tom Cruise’s filmography. People raised their eyebrows out of vague interest at the first instalment. Now we wish our brows had remained securely fixed.

Recommended Scenario: Really? Well, maybe if you’ll see ANYTHING Tom Cruise is in.

This entry was posted on November 3, 2016 by Craig Andrew Robertson in Film Review, Released in 2016.