Blade Runner, the 1982 science-fiction film directed by Ridley Scot, is one of the most perfect while also bizarrely flawed films of the 20th Century.

The tings it had to do well were, be pretty, be spiritual, be like a noir film and feel authentic. It did that and more, becoming a true cult classic and a movie to point to when you wonder why Sir Ridley still gets work. Not to mention it had Rutger Hauer giving one of the great cinema performances.

I say that it was bizarrely flawed because one has t oadmit certain things have not been nearly as timeless. Its portrayal of women is troublesome, particularly in the relationship between Harrison Ford and the replicant Rachel. Smaller things get to me like the dove in the otherwise perfect “Tears in Rain” scene and Roy Battey’s confusing stigmata earlier on.

No movie is perfet. I still really like the ol’ Blade Runner, it’s a moving cinematic film htat tries for higher things, but I don’t see as pretentious. 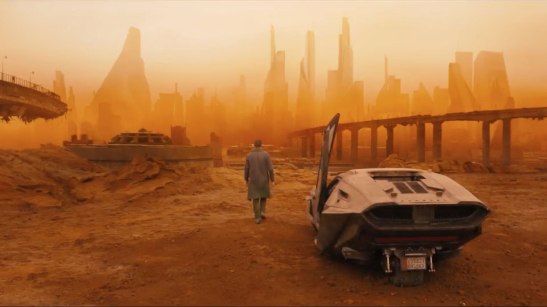 The orange mist descends. Is this a metaphor for the US today?

Craig and members of his University Film Society take a seat in Screen 1 and Denis Villeneuve’s Blade Runner 2049 plays.

I have been cautiously optimistic for a good while about a sequel to Blade Runner. Ridley Scott’s taking a back seat as Executive Producer, a move I feel was to the film’s advantage. Denis Villeneuve is fresh off of a stream of original hits so he has the street-cred to work on something more ambitious.

Blade Runner 2049 picks up 30 years after the original and follows Ryan Gosling as a new Blade Runner trying to solve a mystery. That’s how far I’m going with a plot summation since so much of this film is spoiler sensitive.

Blade Runner as a franchise, it turns out, is amongst other things about feminism. This sequel does something with this interpretation and uses it to not only make it better, but retroactively improve the original film. I waited a week to review this film so I could come to this conclusion. The underlying misogyny present in both these films is a deliberate commentary on the misogyny itself.

I adore the character of Gosling’s girlfriend. She is a very beautifully rendered hologram. Essays will be written on how her character is not an active participant in the story and is basically Gosling’s property. This was on purpose. A negative is a positive, creating an arc which I have a feeling a third Blade Runner film will complete.

Sorry, I had to start by making that point clear, at least to myself.

Onto the unambiguously positive. Everything else.

To start, Roger Deakins will win an Oscar for Best Cinematography in 2018 as an apology for all the disgraceful times he was denied one. Luckily, this is also some of his finest work. Rare is there a big budget film with such gorgeous photography.

Rare too is a blockbuster with this level of commitment to a difficult to grasp, but awe-inspiring tone and world. Villeneuve knows intellectual sci-fi. This is him taking real chances with a 2017 audience and it pays off.

Ryan Gosling has made a living as an emotionless beefcake and here he is perfect as an android android-killer. The stand-out performance, however, comes from Harrison Ford in a considerably smaller reprise of his character from the first film, Deckard. This may be his best work to date in a long career.

This is an odd time to be alive. Sequesl are really good lately. Blade Runner 2049 is in every “measurable” way better than the original, Denis has done a crazy good job.

However, much like The Godfather the original, despite it being improved somehow by its follow-up, is forever going to occupy a special place in the history of film despite a superior sequel. It is of its very particular time. 2019.

Recommended Scenario: If you love to experience some pretty powerfully executed sci-fi.

This entry was posted on October 13, 2017 by Craig Andrew Robertson in Film Review, Released in 2017.