I’m very sorry that this review is so late. I mean, this movie came out months ago, I watched several days ago, what’s wrong with me? Anyway, I’m here now and let’s review Amy.

Amy is a documentary which takes us on a journey alongside Amy Winehouse as she rises to fame as a gifted jazz singer, before, through various extraneous circumstances, she dies at the age of 27 in her London home. 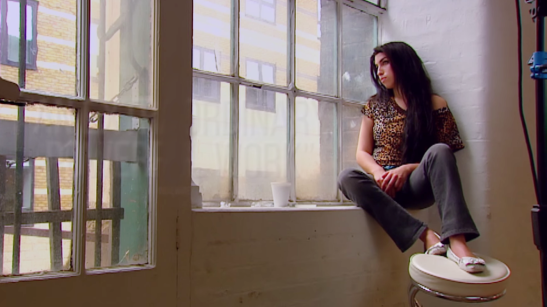 I did not avoid providing that “spoiler” to Ms Winehouse’s fate, for a number of reasons. While one could argue that hiding broad stroke facts about a person before seeing their life documentary can aid in keeping the suspense up, as it did in this film’s director’s other masterpiece Senna, he and his genius, BAFTA-winning team approach the subject of this even more recently deceased celebrity with an overarching theme of inevitability.

This movie does not ascribe the inevitability of Amy’s death to the music industry. It fully acknowledges that a jazz singer can live a long and happy life. A very touching scene, if you can call it that, wherein Amy is singing with her idol Tony Bennett, gives the audience all that they need to know about her drive for music and how she wants to keep going at it till she’s the same age as Bennett. This was one of the moments where I could tears almost feel come to my eyes.

I must confess that when I was younger, having never sat down and actually listened to Amy Winehouse’s music, I was deeply judgemental of her whenever I could be bothered to think vaguely about her. Perhaps it was the drugs or her appearance in the media or the fact that I thought that, again without having listened to her, she’d be just like much of the rest of the modern pop scene of the time, which I found terrible. All completely unfounded.

Upon hearing about this documentary and how well received it was and how it was helmed by the team behind Senna, my favourite documentary of all time, I decided to listen to her music. And you know what, I may be no music critic but I know what I hate. And I don’t hate it. In fact it’s rather good. It’s soulful, intelligent and her voice is superb.

Hearing it in the movie, I feel was even better. There was a real effort to connect both Amy and her craft and it pays off in spades. We see her writing. We see her struggling to write. We see her record. We see how much this woman cared about music.

Through just archival footage and the occasional interview in the background, Amy gives us a retrospective tour of the entire life of this woman. The Winehouse family and friends provided the filmmakers with hours of home video footage to pull from. And like with Senna, the editing of it all is masterful.

Please find this movie on DVD/Blu-Ray. It’s a heartbreaking story that I’m sure everyone, whether they’re familiar with Amy Winehouse or not, should see.

Do I prefer it to Senna? At this moment, yes, but that may be due to the fact that I’ve seen Senna so many times recently!

Recommended Scenario: If you are a cinephile wanting to see the documentary form at its finest or if you want to cry.

This entry was posted on January 1, 2016 by Craig Andrew Robertson in Film Review, Released in 2015.