If you’ve come here expecting me to review Tommy Wiseau’s cult classic The Room (2003), you are unfortunately mistaken. That movie is known as one of the worst movies ever made. This movie has been nominated for Best Picture.

Room, based on the bestselling novel by Emma Donoghue, is story of a young mother and her five year-old son who have been locked for years inside a room. And it’s brilliant. 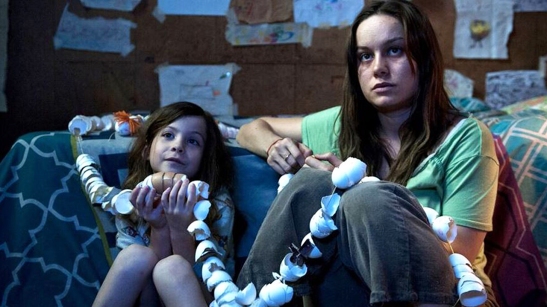 Two future Academy Award Winners if ever I saw them.

Unfortunately, this review can’t actually cover some of the details of what makes this movie so wonderful, due to my strict no-spoilers policy, but I shall make an attempt to dance around it.

First of all, it should be clear that this is a movie that relies heavily on two actors carrying the whole thing through their performances. Brie Larson as the Mum has been nominated for an Oscar and rightly so. This is an actress at the peak of ability showing all the struggle and heartache of this frightening scenario whose only reason to go on living is her love for her child.

Speaking of that child, newcomer Jacob Tremlay is our eyes and ears as a 5 year old who has not seen the world. He is utterly glorious here. Larson’s character has had to lie to Jacob’s about the way the world works to help him survive, like most mothers must do, but blown up by the unusual situation they are in to the nth degree.

These two could not keep this film going if the writing wasn’t as fluid and beautiful as it is. We as an audience know these two inside and out in the first five minutes and no matter how removed from our experiences, this scenario is, we never feel any distance away from how these people feel. Emma Donoghue adapted her novel herself into this screenplay and her knowledge and love of the story shines through to me even though I’ve not read the book. An excellent adaptation.

All of this comes together in a package as tight as the titular room itself under the direction of Lenny Abrahamson who brings out the best performances from his cast using this screenplay while capturing every detail.

This movie goes from horror movie, to touching mother-son drama, to coming-of-age tale. There are times I honestly could hear my heart pounding through my chest.

Like every year, January has given the UK all the best parts of the end of last year from the US as a late Christmas present. Let’s hope that the rest of 2016 can continue with wonderful movies like this one.

Recommended Scenario: When you want reminded how powerful the relationship between a mother and son can be on screen.

This entry was posted on January 25, 2016 by Craig Andrew Robertson in Film Review, Released in 2016.