The Guardians of the Galaxy Vol. 2

The Guardians of the Galaxy was one of the first films I ever wrote a review for. That was years ago now. So I have kind of a special connection with this little franchise. Will this sequel break that connection?

Guardians Vol. 2 follows Star Lord, Gamora, Drax, Rocket & Groot as they continue being scoundrel heroes to the Universe all while Star Lord discovers some interesting things about his past. 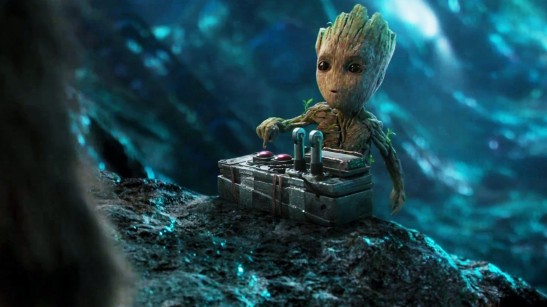 I mean, he’s Groot AND he’s really tiny! This is 90% of the reason this film works!

The sequel to a movie like Guardians has a distinct advantage to the original. It no longer has to spend its runtime setting up all of the heroes and why they come together to form the team. With that spar time, this second entry has time to establish a story with not only larger literal stakes, but larger emotional stakes, the key to a great sequel.

Star Lord, or Peter Quill to his pals, is introduced to his father, an alien played by Kurt Russell. He takes some of the Guardians to his planet while the rest have to del with some of Yondu’s Ravagers (if you haven’t seen the first film, I’d understand if you are completely lost right now).

In terms of story, structure and comedy, this film is less like a Marvel Movie and more like an episode of Futurama. And it is so better for it.

Speaking of comedy, Vol. 2 has it in spades. There were so many times I was properly laughing through the runtime. A number of comedies I’ve seen recently start strong but run out of steam half-way through, including the first Guardians which I re-watched as part of a double-bill with 2. This film does not lose steam.

That doesn’t mean that there are not problems with the comedy. While I love Drax, he is a bit overused and Gamora’s funny side is underused. Also, there are times during serious scenes where the mix of comedy and pathos is not quite right. Some moments make me wince. Like when a friend makes a bad joke at a funeral.

Back to the good, James Gunn and his team sure know how to make a good-looking movie. The first film ever shot in Digital 8K resolution, the colours here pop beautifully, giving a truly fantastical feel to the piece, unlike some other Marvel projects which have much more boring soundtracks and colour palettes like concrete.

Also unlike other Marvel Pictures, there really isn’t a set up for bigger events here, no teases of comic book bits and pieces to be explored in the MCU. Thank God! I’m tired of films that are just set-up for a different movie! I can actually recommend this genuinely good sequel to my MCU ignorant parents!

Recommended Scenario: If you want Guardians of the Galaxy but a little better.